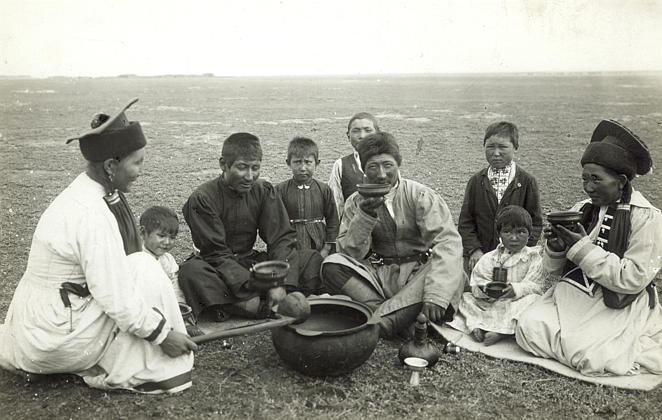 Kalmyks, or Kimliks (Kalmyk Halmg, Halmgud; Mongolian Halimag; Russian Kalmyks) are the only Mongolian (Mongol-speaking) and Buddhist people in Europe, the indigenous population of the Republic of Kalmykia (Russia). Countries of settlement and number Kalmyks live in Russia (about 166,000 people), in Kalmykia (146,000 people), in the neighboring regions of the Volga-Urals region, Stavropol Territory and Siberia, outside Russia - small diasporas in Central Asia, the United States, some European countries etc. In Russian ethnographic literature, in contrast to Western practice, the Oirats of China and Mongolia, who still live in the ancient ethnic homeland of the Kalmyks in Central Asia at the beginning of the 21st century, are often not considered part of the Kalmyk people. Despite the common history, language and roots of culture, these two large groups of Oirats live for a long time in isolation, but maintaining a single national identity. The total number of Oirats (and Kalmyks) is over half a million.

In the XVII century. Kalmyk oirates moved from Dzungaria, crossing the Ural rivers, settling between the Urals and the Volga, and later outside it, founding the Kalmyk Khanate. In 1632, the khans of the Kalmyk merchants formed a union dependent on the Muscovy, but autonomous. The task was to protect the borders of Muscovy from attacks by the Kazakhs. They also took part in the campaigns of the Moscow Empire during the wars with the Polish-Lithuanian Commonwealth, the Ottoman Empire and Sweden. They played an important role in the armies of the Moscow tsars operating in Ukraine. In addition, Peter I was greatly assisted during the Azov campaigns and the first years of the Great Northern War. With the formation of the Russian Empire, the central government chose the path of suppressing ancient freedoms and destroying privileges. This process gradually began to affect the Kalmyks. It intensified especially during the time of Anna I, this policy was continued by Elizabeth I. Empress Catherine II actually completed this process. Eventually, in 1770, such actions provoked opposition from the Kalmyks, who contacted the Qing dynasty government and decided to return to Dzungaria. Khan Ubasha gathered most of his people, crossed the Urals (then Yaik) and moved through the Kazakh steppes to his former homeland. Following them, the tsarist government sent egg goats