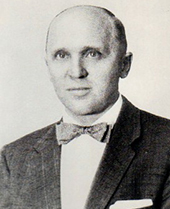 Mykola Kyrylovych Lebid, or Mykola Kyrylovych Lebed (pseudonyms: "Maxim Ruban", "Marko", "Yevhen Skyba", "Oleg", "Oleg", "Igor", "Yaropolk", "Free") January 11, 1909 (according to other sources - 23 November 1910) New Shooting Range, now Zhydachiv District, Lviv Region - July 19, 1998, Pittsburgh, USA) - Ukrainian politician, one of the leaders of the OUN-UPA. The first head of the OUN Security Service (1940-1941). Organizer of the assassination attempt on the Minister of the Interior of Poland Bronislaw Peracki (1934). Fighter for the independence of Ukraine in the twentieth century.

He was born in the village of Novi Strilyska, Bibrk County (now Lviv Region, Zhydachiv District). Son of the tailor Kirill Lebed. Member of the 7th Plastuns' Tent in Lviv, organizer of the first underground "heel" of the Youth, organizer and leader of the Youth in the gymnasium since 1929. In 1930 he graduated from the academic gymnasium. in Lviv. From 1930 to 1932 he took an active part in the organization of OUN youth groups in the Western Ukrainian lands, and was the head of the OUN Youth's underground training camps in the Carpathians. In 1932-34 he was a liaison between the OUN ZUZ National Executive and the OUN leadership abroad. In 1934 he prepared an assassination attempt on the Minister of the Interior of Poland B. Peracki. After the assassination attempt, he tried to leave for Germany via Danzig-Szczecin, but was arrested by the Gestapo on the orders of G. Himmler and extradited to Poland. At the Warsaw Trials of 1935-1936, he was sentenced to death, which was later commuted to life imprisonment in the Holy Cross. On September 5, 1939, Lebid escaped while escorted to another prison. In 1940 he joined the OUNR under Stepan Bandera, and in 1941 became his second deputy. On June 30, 1941, in Lviv, the Ukrainian National Assembly proclaimed the Act of Restoration of the Ukrainian State and the Establishment of the Ukrainian State Government, which included Lebid. In July 1941 he was appointed Minister of State Security in the State Board. As the "ruling leader" after the arrest of Stepan Bandera and Yaroslav Stetsko in 1941, he was the main organizer of the anti-Hitler resistance (Ukrainian anti-fascist Resistance movement). Organizer and leader of three OUNR conferences in Ukraine (September 1941, April 1942, February 1943). In 1941-1944 he negotiated with the Polish Army