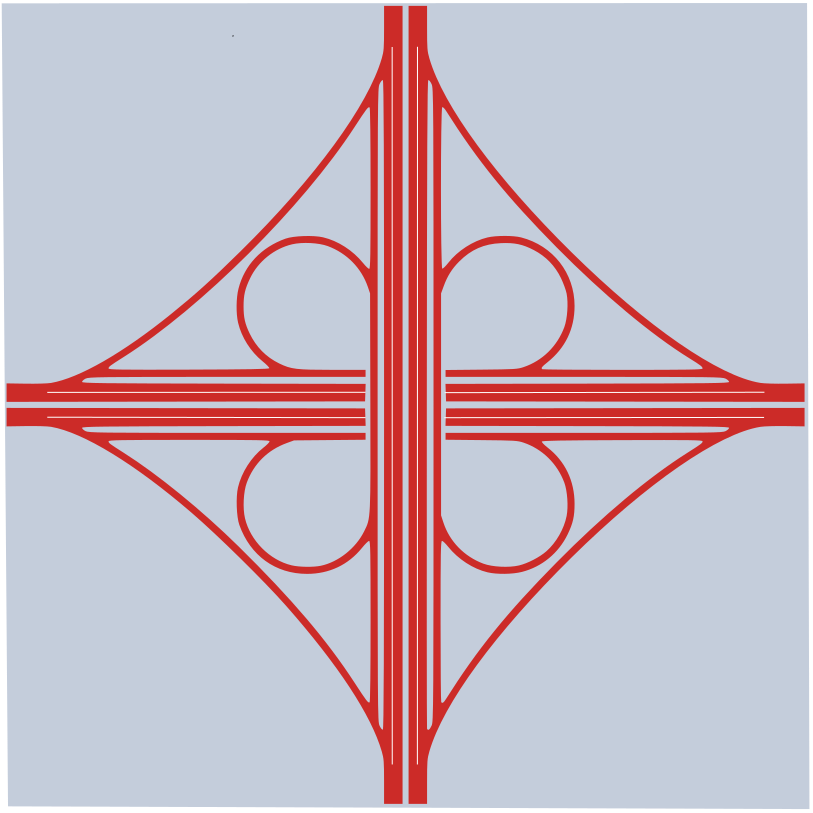 "Cloverleaf interchange" is a two-level transport interchange with four directions, in which loop-like exits (ramps) are used for left turns. That is, instead of turning left by 90 °, the car turns right by 270 °. The solution according to the standard scheme has one overpass, four left-hand ramps (270 ° ±) and four straight right-hand ramps (90 ° ±). Usually, the bridge paves the road with less traffic. Solutions in which all four loops are present are called "complete". Complete schemes are not always appropriate at road intersections with a large difference in traffic intensity, so in such cases, "incomplete" schemes are used, with three or two left-turn loops. After its first introduction in New Jersey (USA, 1929), "clover leaf" quickly gained popularity. In the early years, hundreds of similar interchanges were built in many countries around the world. However, with the increase in traffic intensity and stricter requirements for the organization of traffic flows, the "clover leaf" ceased to meet the need for a quick and convenient change of direction. In the following years, its use decreased significantly, and many existing "clover leaves" underwent restructuring. General description From a bird's eye view, the denouement scheme resembles a four-leaf clover leaf, a rare variation of the three-leaf clover. In the United States, this type of interchange was built long before the advent of the highway network. Initially, they were arranged at road junctions, where the capacity of the diamond-shaped scheme was already insufficient. The main advantage of this scheme was the lack of traffic lights. This allowed them to be arranged not only at the intersections of highways, but also at the intersections of highways and arterial roads, where traffic lights can cause traffic jams. In the United States, the "clover leaf" scheme spread rapidly with the development of the system of interstate highways. In Europe, such a scheme has also become the most common. In urban conditions, the ramps for the "clover leaf" are the streets, and plots of land inside the ramps are set aside for greenery. In this case, usually all ramps have a rectangular elongated shape. Application of such a scheme for intersections dor