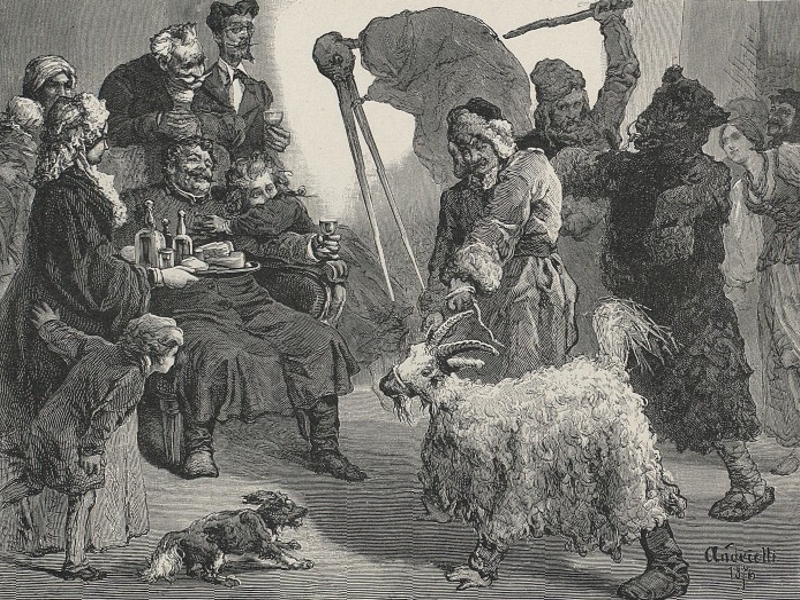 Malanka (Melanka, Melanki, Malania) or Generous Evening (Basil's Evening) is a Ukrainian folk and church holiday, the evening before the "old" New Year or St. Basil the Great on January 1 (14); New Year's rite with traditional disguise of animals and folk characters; participant in this rite; "New Year's Eve". In the XXI century, the celebration of Malanka, in its authentic form, has survived mainly in the villages of Galicia, Bukovina and Podillya. The celebration of Malanka comes from an ancient, probably pre-Christian custom. According to the Christian calendar, it is also the day of St. Melania (Melanka, Malanka, Milanka). Melanka-Voda comes to the generous evening together with Vasyl-Misyats to inform the hosts about the next celebrations and to celebrate the guests, which are popularly called - Melanka's guests. In the Ukrainian folk tradition, pre-Christian and Christian rites were united on the feast of Melanka.

"Starting from Holy Evening and ending with the Epiphany, there is a special revival in villages and cities. Here and there they "carol" or "generously", they used to go with a "nativity scene", and now more "with a star"; in the villages they drive on the streets of the "overcrowded" and this action is known as "driving a goat", which is replaced by "lightning" on New Year's Eve (December 31 - Malania Ave.). In some houses Christmas trees are arranged. Lightning on New Year's Eve is also spent all night on the streets, jumping and dancing to songs or music. But then special songs are sung, known as "Christmas carols", because in these songs they wish the owner a "generous" year for everything on the farm. Boys are usually generous, and girls less often. Sometimes the next morning "lightning" goes to sow. She was asked to sit on a bench in the house, saying: "Sit with us and sit down so that all good things sit with us: chickens, geese, ducks, swarms and elders" ":" Podolsk Diocesan News ", 1887. December 31 in the old style, January 13 in the new - the day of St. Melania, whence the name of the holiday. In some villages of Vinnytsia region on this day a traditional holiday dish of blood is prepared, which is also called "lightning". They also bake special Malanka and Vasyl breads. "December 31 for melancholy, ie no