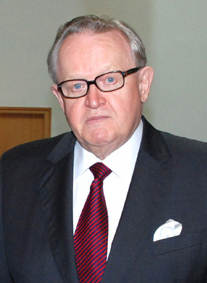 Martti Oiva Kalevi Ahtisaari (Fin. Martti Oiva Kalevi Ahtisaari; born on June 23, 1937, Vyborg) is a special envoy of the UN Secretary General to lead the process of determining the future status of Kosovo. Since 1965, he worked alternately in the Ministry of Foreign Affairs of Finland and the United Nations. In 1994-2000 he was the president of Finland. Acted as an international mediator in various armed conflicts between South Africa and the rebels of Namibia, NATO and Yugoslavia, Great Britain and Irish terrorists, Indonesia and the separatists of the province of Aceh. In November 2005, he was appointed a special envoy of the UN Secretary General in Kosovo. Winner of the Nobel Peace Prize in 2008.

Marti Ahtisaari was born on June 23, 1937 in the Karelian city of Vyipuri in Finland (now the Russian city of Vyborg). From 1965, Ahtisaari began working in the Department for Aid to Developing Countries (later the Department for Cooperation with Developing Countries) of the Ministry of Foreign Affairs of Finland. In 1973, Ahtisaari was appointed Ambassador Extraordinary and Plenipotentiary of Finland to Tanzania, and in 1975, concurrently, he headed the Finnish diplomatic mission in Zambia, Somalia and Mozambique. In 1977, Ahtisaari assumed the position of UN High Representative in Namibia. In 1984, Ahtisaari returned to Finland: he took the positions of Assistant Secretary of State for Aid to Developing Countries and Head of the Department of Aid to Developing Countries in the Ministry of Foreign Affairs. In 1987, Ahtisaari became the UN Deputy Secretary General for Economic and Administrative Affairs. In 1989-1990, Ahtisaari managed UNTAG (United Nations Transition Assistance Group) in Namibia, an 8,000-strong UN military and civilian contingent engaged in the preparation of democratic elections. In 1991, Ahtisaari headed the Ministry of Foreign Affairs of Finland. In 1992-1993, he was the head of the working group from Bosnia and Herzegovina at the UN international conference on the former Yugoslavia in Geneva, spoke at the conference as a special consultant and held the position of special representative of the UN Secretary-General for the former Yugoslavia. In 1994, Ahtisaari was elected president of Finland. In the spring of 1999, he became one of us