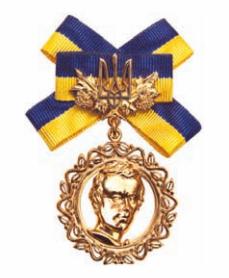 The Taras Shevchenko National Prize of Ukraine is often referred to simply as the Shevchenko Prize, a state award of Ukraine, the highest creative award in Ukraine for a significant contribution to the development of culture and art. Founded in 1961. The National Prize is set to reward the most outstanding works of literature and art, journalism and journalism, which are the supreme spiritual heritage of the Ukrainian people, affirm high humanistic ideals, enrich the historical memory of the people, their national consciousness and identity, aimed at state formation and democratization of Ukrainian society. History of the award On May 20, 1961, the Taras Shevchenko Republican Prize was established by Resolution of the Council of Ministers of the USSR № 646. She was awarded outstanding artists for highly ideological and highly artistic works and works in the field of literature, fine arts, music, theater and cinema. Pavlo Tychyna, Oles Honchar in the field of literature and Platon Mayboroda in the field of music were the first to receive the Diploma and the Laureate's Badge of Honor on March 9, 1962. On April 23, 1969, Resolution № 285 of the Central Committee of the Communist Party and the Council of Ministers of the Ukrainian SSR established the Committee on State Prizes of the Ukrainian SSR named after Taras Shevchenko in the field of literature, art and architecture under the Council of Ministers of the Ukrainian SSR and established 5 annual awards. Since 1976, the number of Awards has been increased to 8. Between 1969 and 1988, 22 Architecture Prizes were awarded. Since 1988, prizes in architecture have been awarded by a separate Committee. Since 1982, one of the 9 Prizes has been awarded for the best work of literature and art for children and youth. The winners in this nomination were: Georgy Yakutovych - for illustrations to the books "The Tale of Past Years", "A Word on Igor's March", "Karby". Uncle. The thief was caught "by M. Cheremshina," Kozak Golota "by M. Pryhara (1983). Mykola Vingranovsky - for collections of works for children "Summer Morning", "Summer Evening", "Swallow by the Window", "Goodnight" (1984). Eugene Gutsalo - for the novel "Sayora", a collection of short stories "Flying Horses"; Popenko DP, Los LF - architects, Pukhova IP - design engineer - for the complex of the Republican Scientific and Methodological Center for Maternal and Child Health (1985). Mikhail Bel�