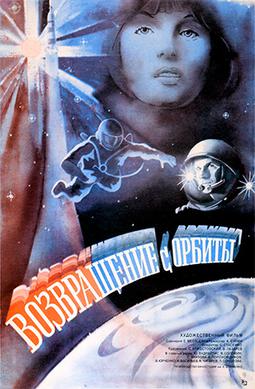 "Return from Orbit" is a 1983 Ukrainian Soviet fantasy feature film directed by Oleksandr Suryn and produced by the Oleksandr Dovzhenko Film Studio. The first film shot in space was on the Salyut-7 orbital station. Cosmonaut Kuznetsov decided to break up with space flights forever due to the death of his wife. But when an accident occurs at the orbital station and his partner is in trouble, Kuznetsov returns to space once again.

Pavlo Kuznetsov and Vyacheslav Mukhin are cosmonauts and good friends. They have been preparing for their first joint flight for many years, but an accident occurs during launch of the launch vehicle. Friends are saved thanks to the emergency rescue system. When the next joint flight is being prepared, Kuznetsov's wife dies suddenly, leaving him with a young daughter. Kuznetsova, being in deep mourning, refuses to fly into space and decides to break with cosmonautics forever. He leaves the Baikonur cosmodrome by train. Mukhin catches up with him, but persuasions to take away the resignation report remain useless. After getting off at the station in the middle of nowhere, Mukhin calls his friend Sasha in the middle of the night and offers to marry him. The next day, Mukhin starts with another partner. After hearing the TARS announcement about the launch on the radio, Kuznetsov's neighbor in the compartment comments on the work of the cosmonauts as an easy walk for awards and glory. Kuznetsov reminds him that every flight can be fatal. During the flight at the orbital station, the docking station crashes, Mukhin's partner is seriously injured and must immediately return to Earth. However, due to an accident, their ship cannot undock from the station. Kuznetsov is removed from the train on the orders of the head of the cosmonaut detachment, Major General Sviridov, and as part of the team, with one more cosmonaut, takes off on a second ship to help Mukhin. After dragging the injured cosmonaut through outer space to their ship, Kuznetsov and Mukhin repair the station. However, when returning to Earth, the ship falls under a meteor shower, which pierces the cladding of the aggregate compartment and damages the maneuvering engines and the orientation system. Cosmonauts close their helmets and switch to a reserve supply of oxygen, which �