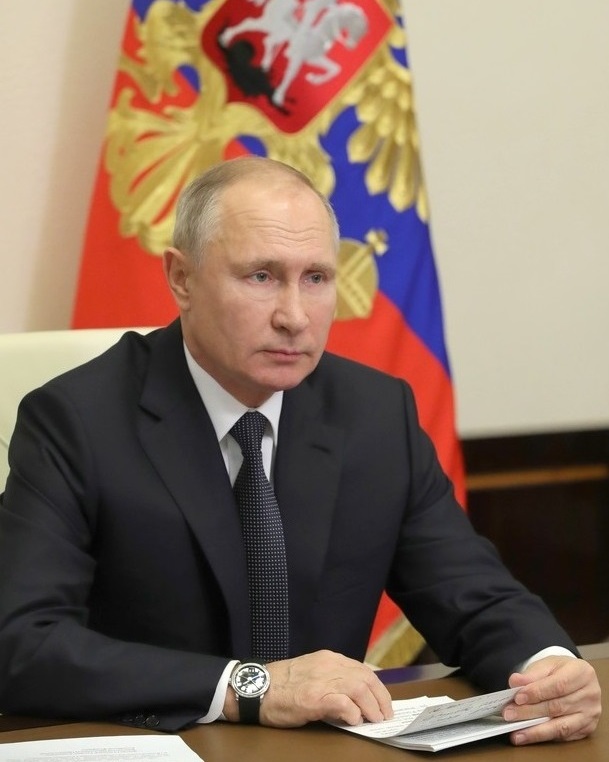 Vladimir Vladimirovich Putin (Russian: Владимир Владимирович Путин; born October 7, 1952 in Leningrad) is a Russian statesman and politician, a former Soviet intelligence officer. Incumbent President of the Russian Federation and Commander-in-Chief of the Armed Forces of the Russian Federation since May 7, 2012. He previously served as President of the Russian Federation from December 31, 1999 to May 7, 2008, and in 1999-2000 and 2008-2012 he served as Prime Minister of the Russian Federation. Reservist Colonel (1999). Acting State Counselor of the Russian Federation 1st Class (1997). Candidate of Economic Sciences (1997). Master of Sports in Sambo (1973) and Judo (1975), Champion of Leningrad in Judo (1976) Honored Coach of Russia in Sambo (1998). He speaks German. Putin was born in Leningrad, where he spent his childhood. He studied law at Leningrad State University (LSU). He worked as a KGB foreign intelligence officer for 16 years, including 6 years in Dresden in East Germany. Putin resigned as a lieutenant colonel and returned to Russia, where he became vice-rector of the LSU. He soon became an adviser, and in 1994 - the first deputy of Anatoly Sobchak. In 1996 he moved to Moscow, joined Boris Yeltsin's team and became Deputy Head of the Office of the President of the Russian Federation. In July 1998, Putin headed the Federal Security Service. In August 1999, Yeltsin appointed him head of the Russian government. After the latter's resignation, Putin became acting president, and with the victory in the election, directly to the President of the Russian Federation, gaining popularity due to his tough stance on the issue of Chechnya. During the first two terms, the Russian economy recovered from the post-communist depression and financial crises, there was a decline in unemployment and a significant increase in GDP, due, in particular, to rising oil prices. Economic reforms were combined with increasing the power vertical, narrowing regional autonomy, increasing state pressure on the media, and reducing the influence of the big oligarchs, whose property and wealth became dependent on loyalty to the regime. In foreign policy, Vladimir Putin initially offered to work with the West, but later announced a course to return Russia to great power and confront the United States and NATO. After the aggravation of this