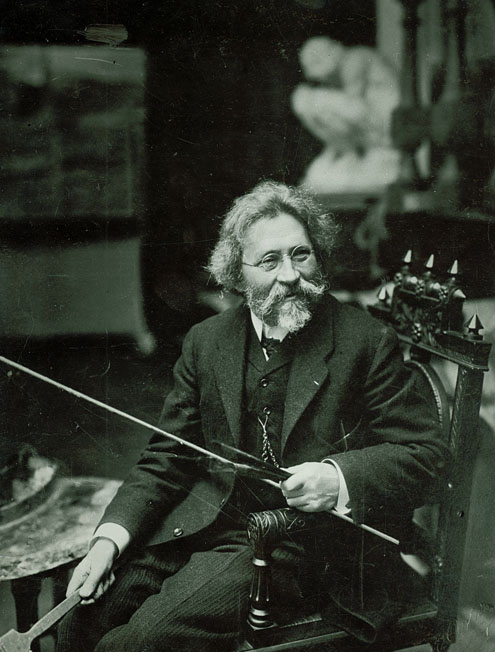 Ilya Yukhimovich Repin (old Repin , Ripin; July 24 (August 5) 1844 (18440805), Osinovka settlement near Chuguev, Kharkiv province, Russian Empire - September 29, 1930, Kuokkala, Terijoki, Finland) - Russian painter of Ukrainian origin from Slobozhanshchina. The son of a soldier, in his youth he worked as an icon painter. He studied at the School of Drawing under the direction of IM Kramsky, continued his studies at the St. Petersburg Academy of Arts. Since 1878 he has been a member of the Society of Mobile Art Exhibitions. Academician of the Imperial Academy of Arts. Professor - head of the workshop (1894-1907) and rector (1898-1899) of the Academy of Arts, teacher of the school-workshop Tenisheva; among his students were BM Kustodiev, IE Grabar, IS Kulikov, FA Malyavin, AP Ostroumov-Lebedev, and MI Feshin. VO Serov's direct mentor. From the very beginning of his career, from the 1870s, Repin became one of the key figures of realism in the Russian Empire. The artist managed to solve the problem of reflecting in a painting all the diversity of life around him, in his work he was able to cover all aspects of modernity, touch on topics that troubled the public, reacted sharply to the anger of the day. Repin's artistic language was characterized by plasticity, he adopted various stylistic trends from the Spaniards and Dutch of the XVII century to Alexander Ivanov and modern French Impressionists. Repin's work flourished in the 1880s. He creates a gallery of portraits of contemporaries, works as a historical artist and master of domestic scenes. In the genre of historical painting, he was attracted by the opportunity to reveal the emotional expressiveness of the proposed situation. The element of the artist was the present, and even creating paintings on the themes of the legendary past, he remained a master of the painful present, reducing the distance between the viewer and the heroes of his works. For the last 30 years of his life, Repin lived in Finland, in his estate Penati in Kuokkali. He continued to work, although not as intensively as before. In recent years, he switched to biblical stories. In Kuokkali, Repin wrote memoirs, a number of his essays were included in the book of memoirs "Far Near". Repin was a close friend of Ukrainian historian Dmytro Yavornytsky.

He was born in Chuguyev Kharkiv