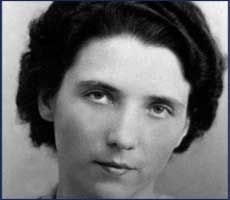 Yaroslava (Slava) Yosypivna Stetsko (born Anna Yosypivna Muzyka; born May 14, 1920 in Romanivka, now Terebovlya District, Ternopil Region; died March 12, 2003 in Munich) is a Ukrainian politician, journalist, co-organizer of the UPA Red Cross and UPA Bloc peoples (ABN). Wife of Yaroslav Stetsko. Chairman of the OUN (b) (1991-2001). The first leader of the Congress of Ukrainian Nationalists (KUN). Member of the Verkhovna Rada of Ukraine of the second, third and fourth convocations.

She graduated from Terebovlya Ukrainian Gymnasium, was active in the Maria Wife. Member of the OUN since 1938. In 1939 she graduated from the Humanities Lyceum and began teaching in the village of Yushkivtsi (now Stryi district). In 1941 she began studying at the Faculty of Civil Engineering of Lviv Polytechnic. In 1943 she was imprisoned by the Germans in Lviv. In 1944, on the instructions of the OUN leadership, he went abroad. In 1945 he took part in the release of the wounded Yaroslav Stetsko from the Bolshevik arrest in the Czech lands. Member of the OUN leadership. In 1946 he married Yaroslav Stetsky. In Munich, he completed technical and language studies at the Institute of Law (German and French). Member of the CYM Central Board (1948-1953). since 1968 - head of the foreign policy sector of the OUN. She was a member of the Central Committee of the Anti-Bolshevik People's Bloc (ABN), president of ABN, editor-in-chief of ABN-Correspondence (since 1948), Ukrainian Review and various ABN publications, organizer of ABN conferences and participant in international anti-communist congresses, co-organizer of the European Freedom Council. After Ukraine gained independence on August 24, 1991, she returned to her homeland, having spent many years in forced emigration and not acquiring foreign citizenship. She has headed the Congress of Ukrainian Nationalists since 1992. In 1991-2001 he was the head of the OUN (b) leadership. Member of the Verkhovna Rada of Ukraine of the second, third and fourth convocations from the constituency № 89 of Ivano-Frankivsk region. The oldest deputy, therefore, opened the sitting of the newly elected Verkhovna Rada. She died at a Munich hospital on March 12, 2003, less than two months before her 83rd birthday. She was buried on March 16 in Baikovo Street