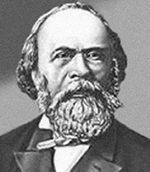 Lev Semenovich Tsenkovsky (* 1 (13) October 1822 (18221013), Warsaw - † September 25 (October 7) 1887, Leipzig) - Polish-Ukrainian botanist, protozoologist and bacteriologist who lived and worked in Ukraine. In the international scientific literature he is known as: Lev Semenovich Cienkowski. Founder of the first school of domestic microbiologists. From 1839 he lived and worked in Russia, from 1865 in Ukraine: in 1865-1871 he was a professor at Novorossiysk University (now Odessa II Mechnikov National University) in Odessa, and from 1871 at Kharkiv University). Corresponding Member of the St. Petersburg Academy of Sciences in 1881. He founded a veterinary bacteriological station at the Kharkiv Veterinary Institute (together with AS Raevsky), where anthrax vaccines were produced.

He was born on October 13, 1822 in Warsaw, in a Ukrainian-Polish family. He received his secondary education at the Warsaw Provincial Gymnasium, which he graduated from in 1839. Then he was sent to St. Petersburg as a scholarship holder of the Kingdom of Poland. There Tsenkovsky entered the mathematical department of St. Petersburg University. In 1844 Tsenkovsky graduated from the university with a degree of candidate of natural sciences. He remained at the department, where he received a master's degree in two years, defending his dissertation "Some facts from the history of conifers." In 1850 Lev Semenovich became a professor at the Department of Natural Sciences at the Demidov Lyceum, where he worked for five years. Then the scientist moved to the Department of Botany at St. Petersburg University. In 1851 he defended his dissertation and received his doctorate. Scientific activity In 1847, Tsenkovsky was invited to take part in an expedition to Sudan and the White Nile. In two years, he collected rich material from the flora and fauna of Sudan. The results of the work were published in the Georgaficheskie Vedomosti (1850) and Gazeta Warszawska (1853). In 1865, the Novorossiysk University (now the II Mechnikov Odessa National University) was opened in Odessa. Tsenkovsky was invited to the university as a professor of botany. There he took part in the founding of the Novorossiysk Society of Nature Researchers and the creation of the Sevastopol Biological Station - the first in the Russian Empire and the third marine biological station in Europe.