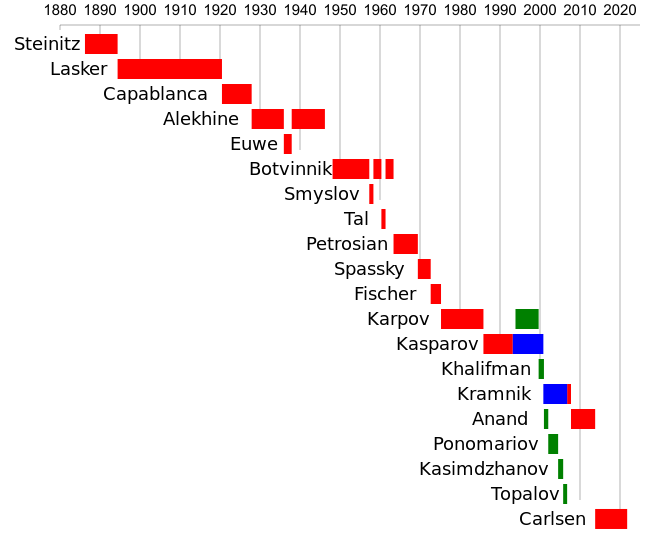 The World Chess Championship is a competition for the title of official world chess champion. Since 1948, the competition for the title of champion is held under the auspices of FIDE. The current champion is Magnus Carlsen. The first event, which is generally recognized as the world championship, was a match for the title of world chess champion in 1886, which was attended by the world's strongest chess players at the time - Wilhelm Steinitz and Johann Zuckertort. Steinitz won and became the first world champion. In 1886–1947, the champion set the conditions, the championship matches were held by mutual consent of the champion and the contender. After the death of Alexander Alekhine in 1946, FIDE began to lead the championship. Mykhailo Botvinnyk became the first FIDE world champion in 1948, defeating four contenders in the tournament. Between 1993 and 2006, the title was split due to Harry Kasparov's conflict with FIDE. Magnus Carlsen has been a champion since 2003. The World Cup is open to all players, but there are separate titles for women, juniors, children and the elderly; there is a championship among computers. There are also different types of championships, such as the World Blitz Championship. Unofficial champions The main rules of chess were formed before the XV-XVI centuries. At that time, the main chess players were Renaissance masters who worked in Italy and Spain. The strength of the players of that time can be guessed by looking at books published by chess theorists in the XV-XVII centuries: Francesc Vicent - Free of the most popular parts in the name of 100 orders and compost for me Francesch Vicent ) Luis Ramírez de Lucena - Repetición de amores y arte de ajedrez (Spanish: "Repetition of Love and the Art of Chess", Salamanca, c. 1497) Pedro Damiano - Il Libro da imparare giocare a scachi et de li partiti (Italian: "Book of Chess", Rome, 1512) Rui Lopez - Libro de la invención liberal y arte del juego del Axedrez Alessandro Salvio - Italian. Treatise of the Invention and Liberal Art of the Gioco Degli Scacchi (Naples, 1604) Gioachino Greco - Italian. Treatise of the noble and military exercise of Scacchi nel quale se contengano molti bellisimi Tratti e la vera Scienza, bl. 1617–1620