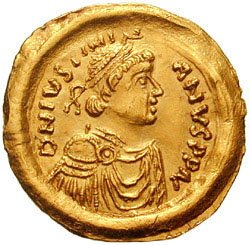 Flavius ​​Petro Savvaty Justinian (lat. Flavius ​​Petrus Sabbatius Iustinianus, Greek. Φλάβιος Πέτρος Σαββάτιος Ιουστινιανός; known as Justinian I Greek. Ιουστινιανός Α '; 483/482, Tavresiy, Upper Macedonia - 13 or 14 November 565, Constantinople) - Emperor Byzantine Empire from August 1, 527, until his death in 565. He called himself Caesar and had the titles of victory: the Great Conqueror of Alaman, Gothic, Frankish, German, Ant, Alan, Vandal, African. During his reign, many lands of the Roman Empire were annexed (restored control) to the Eastern Roman Empire. In particular, the kingdom of the Vandals and Alans in Africa, the kingdom of the Ostrogoths in Italy, the annexed part of the lands of the kingdom of the Visigoths in Spain, and the Goths, Franks, Alemanni, Anti declared themselves vassals of the emperor. According to legend, Justinian had Slavic roots, and during the reign of his uncle Justin I played a key role in the political life of Byzantium. Holy Faithful Prince. Revered by Christians on November 14.

Most likely he was an Illyrian, born into a peasant family in Tavez (Macedonia), but thanks to his uncle Justin I was educated in Constantinople. Childless Justin I quickly became attached to a smart nephew, who, with the help of an influential relative, made a rapid career to the rank of commander of the capital's military garrison (magister equitum et peditum praesentalis). Justin I later adopted the boy and made him his successor. Like Napoleon, Justinian I slept little, was extremely energetic and attentive to the little things. In addition, Justinian I was a remarkable embodiment of "Byzantine politics". Dishonest, hypocritical, arrogant and insidious, he slightly ignored the agreements and promises made to achieve his own goals. He was strongly influenced by his wife Theodora, a former dancer and courtesan. After her death, he became less determined as a ruler.

He immediately launched a general program to revive the greatness of Rome. The whole policy of the emperor was subordinated to this idea. That is why administrative, religious, military, tax reforms, as well as codification of law were carried out. Surrounded exclusively by local talented advisers, Justinian I almost did not