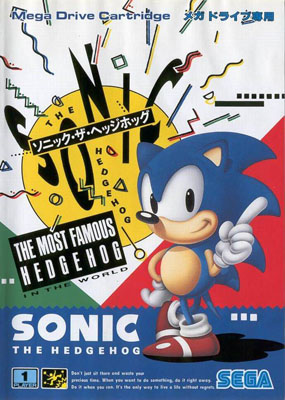 "Sonic the Hedgehog" (Japanese: ソニック ザ ヘバョホッグ Sonikku za Hejjihoggu, Ukrainian: Хижак Соник, also Sonic the Hedgehog 1 or, for short, Sonic 1) is a video game in the platform genre developed by Sonic Team, a division of the Sega Corporation. The game was released on June 23, 1991 in North America and Europe for the Sega Mega Drive/Genesis console, and was later included in the Sega 6-Pak. The Japanese version appeared on July 26. At the time of its release, Sonic the Hedgehog was one of the fastest platform games. Gameplay focused on elements that made the most of the 16-bit console. Sonic the Hedgehog featured numerous new-for-Sega games, which only contributed to its popularity during the 16-bit era. The main character, Sonic the Hedgehog, could run, jump and roll the fastest of any platformer character at the time. In addition, the levels of the game have been made in such a way that players strive to complete them as quickly as possible. This game introduced the character Sonic the Hedgehog for the first time, and the game itself allowed the Sega Genesis console to gain great popularity in North America. After its release, it was sold with the console, replacing the pre-installed game Altered Beast.

The player controls a humanoid hedgehog, Sonic, who can run, jump and curl into a ball. He has to go through six game zones, each divided into three acts, surviving and meeting the time limit. Each act is given 10 minutes to complete, obstacles, traps and enemies stand in the way. At the start, Sonic is given 4 lives. At events, he collects rings, and having at least one, he can protect himself from falling into a trap or from an enemy attack. In this case, Sonic will simply destroy the rings, but he will remain alive. The rings scattered during the attack can be collected, but in a quantity of no more than 20 and for a limited time, otherwise they will soon disappear. In the event of Sonic's death, the player starts the act anew or from special control points, if the player happens to mark them. Depending on the time spent on passing and the rings brought to the end of the act, the player is awarded points at the end of the act. Points are also awarded for each destroyed enemy. After starting to run, Sonic accelerates quickly if there are no obstacles in the way. The hedgehog is able to roll and hit