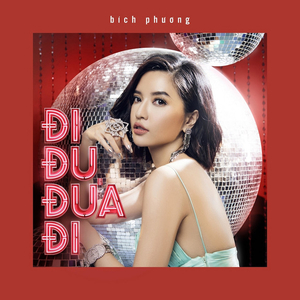 "Walk away" is a song performed by Vietnamese female singer Bich Phuong. The song was composed by Tien Cookie and Pham Thanh Ha, with the arrangement by DuongK. "Walk away" belongs to disco, deep house and electropop genres. The lyrics of the song are inspired by the slang phrase "swinging" that Bich Phuong often uses with friends to refer to going out. Tien Cookie said the main message of the song is to "encourage people to live a little bit of fun." 1989s Entertainment released this single on August 24, 2019. After its release, the phrase "swinging" and the lyrics in the song quickly became a trend of the online community, despite the two opinions. Praise and criticism varied from critics and audiences. At the Blue Wave Awards ceremony, "Go Swing Away" entered the Top 10 most popular songs (musician) and was nominated in two other categories. The song's music video was made by a director. performed by Nhu Dang. The content of the video is about an old woman who returns to her youth by using high-tech equipment to enter the virtual world. Denis Dang, who took the position of creative director for the video, then got into a ruckus when this plot he made was accused of plagiarizing "San Junipero", an episode of the TV series Black Mirror. The video won a Metub WebTVAsia Awards for Best Dance Music Video. Bich Phuong performed the song at the Asia Artist Awards held at the end of 2019. In October of the same year, when the female singer was performing the song in Quang Ninh, an audience pulled the microphone to announce her search. child. Controversy occurred when this incident revealed the background music with pre-recorded vocals that the female singer was using to sing on top of it, prompting many comments to accuse her of lip-syncing. After the noise, the Department of Culture and Sports of Quang Ninh province decided to sanction the female singer and the concert organizer with 9 million dong for the regulation that singers cannot sing on music with pre-recorded vocals.

"Walk away" was composed by Tien Cookie and Pham Thanh Ha, with arrangement by DuongK. This trio has become the mainstay group of musicians for Bich Phuong since they collaborated on Dramatic (2018), the female singer's second studio album. Bich Phuong said that in the past year, she has tried to release many fast-paced songs. However, after the single "Sister reclining me lifting" received a lot of negative feedback, she absorbed the opinions and learned from the experience before producing "Go for a swing"."Go for a swing" described. Description is a disco song that blends deep house and electropop genres, bringing back nostalgia for the popular "discotheques" of the 80s and 90s. When embarking on the implementation, the female singer and the crew agreed that they would compose a song that did not carry a heavy message, mainly to "encourage everyone to live happily and comfortably." She added, "Usually when making a product, I think about how I feel first. Right now I do what I'm most happy." The phrase "swinging" used in the song is the word slang that Bich Phuong often uses with friends to refer to going out. Speaking of lyrics, Ms