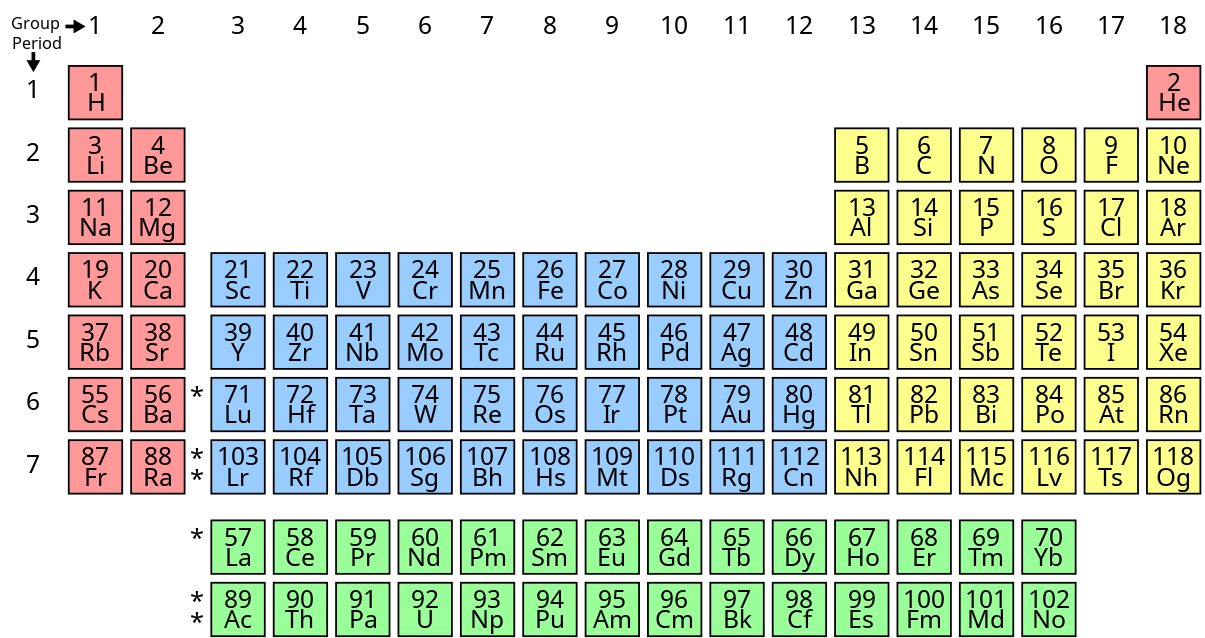 The Periodic Table (full name Periodic Table of Chemical Elements, also known as Mendeleev's Periodic Table), is a method of listing chemical elements in tabular form, based on atomic numbers ( number of protons in the nucleus), electron configurations and their cyclic chemical properties. The elements are represented in order of increasing atomic number, usually listed with the chemical symbol in each box. The standard form of the table has the elements arranged in 18 columns and 7 rows, with two separate double rows at the bottom. The rows in the table are called periods, while the columns are called groups, some with their own names like halogens or noble gases. Because by definition a periodic table shows periodic trends, any table of any kind can be used to infer relationships between the properties of elements and predict the properties of new elements. , unexplored or unsynthesized. Thus, a periodic table—whether in standard or variant form—provides a useful framework for chemical property analysis, and such tables are widely used in chemistry and other sciences. other study. Although there were earlier pioneers, Dmitri Ivanovich Mendeleev is generally considered to have published the first popular periodic table in 1869. He developed his periodic table to illustrate periodic trends in physics. calculate the then known elements. Mendeleev also predicted some properties of unknown elements that he hoped would fill in the gaps in this table. Most of his predictions proved correct when the elements were discovered one after another. Mendeleev's periodic table has since been expanded and revised with the discovery or synthesis of new elements and the development of theoretical models to explain chemical properties. All elements with atomic numbers from 1 (Hydrogen) to 118 (oganesson) have been discovered or synthesized, while elements 113, 115, 117 and 118 are still not widely recognized. The first 98 elements exist in nature, although some are only found after being synthesized in the laboratory and exist in extremely small amounts. Elements with atomic numbers 99 to 118 have only been synthesized, or are claimed to have been synthesized in the laboratory. There is still a pursuit to create elements with larger atomic numbers, as well as controversy over the question of how the periodic table may need to be adjusted to be compatible with new elements that will add.

Note: This is the most common 8-column periodic table layout, known as the regular or standard form, or sometimes called the long table, in comparison to the short or Mendeleev style tables Archive 2013-12 -17 at the Wayback Machine, usually groups from 3 to 12 by grouping into the main group. The periodic table differs in that it contains both the lanthanum and the actinium families, instead of separating them from the main body of the table. As the periodic table expands, more periods are added