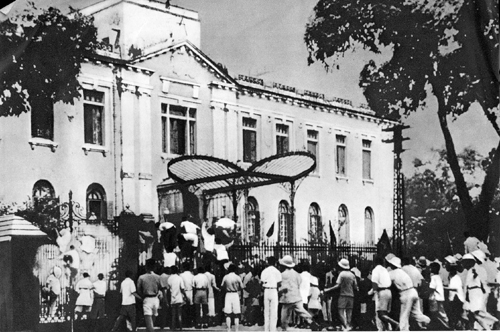 The August Revolution, also known as the August general uprising, is the name of the mainstream history in Vietnam today, used to refer to the Viet Minh movement waging an uprising against the Japanese Empire, forcing the Vietnamese Empire to hand over central and local governments and forced Bao Dai to abdicate in August 1945. The transfer of power was carried out by the Imperial Government of Vietnam basically in peace, with few conflicts despite disputes with Japanese, Dai Viet, Hoa Hao,... in some localities. Except for a few provinces and cities such as Hai Ninh (now in Quang Ninh), Ha Giang, Lao Cai, Lai Chau, Vinh Yen are in the hands of other parties such as Dai Viet, Vietnam Nationalist Party, ... and the military. Chiang Kai-shek (China); In just 10 days, Viet Minh government bases were set up in all provinces and cities across Vietnam (at the latest on August 28: Dong Nai Thuong, Ha Tien), most of the country. Some places with more difficulties such as Ha Giang, Chiang Kai-shek's army forced to withdraw Japanese troops (August 29) and liberated this province, Cao Bang (taking power on August 21, but then Chiang's army invaded), Lang Son (captured power, then Chiang Kai-shek's army invaded, established the revolutionary government in October), Vinh Yen (held by the Nationalist Party), Hai Ninh - Mong Cai (held by the Vietnamese Cach Mang Dong Hoi) , some areas in Quang Ninh (held by Dai Viet, Vietnamese Cach Mang Allied Hoi), in Da Lat (Japanese forces still resisted strongly as on October 3). As a result of the revolution, on September 2, 1945, Ho Chi Minh read the Declaration of Independence of Vietnam, giving birth to the Democratic Republic of Vietnam, and at the same time ending the existence of the absolute monarchy. 2,000 years in Vietnamese history. After that, the Democratic Republic of Vietnam held the 1946 General Election nationwide.

World War II broke out, the Axis faction including Germany, Italy, Japan fought against the Allied faction including Great Britain, France, and the Soviet Union. After that, the US and many other countries joined the war (including Viet Minh, Pathet Laos, Issarak Cambodia in Indochina. In September 1940, right in the middle of World War II, the Vichy Government of France, having surrendered to Nazi Germany, agreed to let Japanese troops land in Tonkin. Immediately, the Japanese military used it as a springboard to influence the battlefields of China and Southeast Asia. In fact, this is an important point in Japan's military strategy to dominate all of Southeast Asia. While waiting for Germany's great victory in Europe, Japan temporarily maintained the French protectorate system in Indochina. (Among the major battles at that time can be mentioned the Japanese navy and air force departing from Cam Ranh and Saigon to destroy the British Far Eastern Fleet.) During this time, the Indochinese Communist Party led many uprisings against the French colonialists, such as the Cochinchina Uprising, the Bac Son Uprising, and the Nghe Tinh Soviet, but they all failed. The soldiers who participated in the Thai war to carry out the Do Luong Mutiny also failed. In May 1941, the patriotic forces, of which the core was the Indochinese Communist Party, led by Ho C