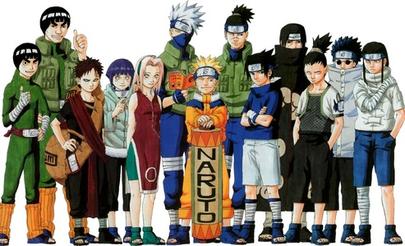 Below is a list of characters in the famous Japanese manga series Naruto by author Masashi Kishimoto. In the Naruto world, there are five major countries known as the Five Great Ninja Kingdoms, each of which has its own ninja village that is Konoha (Konohagakure) in Fire Nation, Sand Village (Sunagakure) in Wind Country, Mist Village. (Kirigakure) in the Water Country, Cloud Village (Kumogakure) in the Land of Thunder, and Stone Village (Iwagakure) in the Earth Kingdom. In addition, neighboring small countries also have small ninja villages.

Team 7 is a ninja team from Konoha (Konohagakure Village or Konohagakure) consisting of 4 main characters of this series.

Naruto is the son of the Fourth Hokage Namikaze Minato and Uzumaki Kushina. When Naruto was born, it was also the time when Kurama (Nine-Tails) was released and destroyed the village, Naruto's father at that time was the Fourth Hokage sacrificed his body to release the seal on Naruto to save the village, turning him into a human. Jinchuuriki (Human Strength) of the Nine-Tails, his mother, who was the previous Jinchuuriki, was also lost due to the Nine-Tails being pulled from her body. After the death of the Fourth, the Third Hokage Sarutobi Hiruzen returned to run Konoha, he took Naruto's mother's surname to cover it up and did not reveal his identity. However, he still secretly cares about Naruto. Naruto had a lonely childhood, didn't know who his parents were, didn't have a single friend and was always looked at with cold eyes by everyone in the village (because they were afraid). that the Jinchuuriki could be dangerous to them). Because of that, Naruto was always trying to get attention with his pranks. The first person to acknowledge his existence was his first teacher, Umino Iruka. In the Ninja Academy, he has a crush on a girl named Haruno Sakura, but that girl is infatuated with the handsome Sasuke Uchiha, who is considered a genius in the class and who Naruto absolutely hates. always wanted to pass. In the class, there is a girl who secretly likes Naruto, Hyuga Hinata, but that girl is very shy and doesn't dare to say it. Naruto has to say that a student with very bad academic performance, in the ninja academy graduation exam he failed three times, master Mizuki used him to steal the Hokage's secret book of forbidden arts. During the battle with Mizuki to protect Naruto, Iruka defended Naruto with his body. From then on, for Naruto, Iruka was more than a teacher. He learned the forbidden technique of Multiple Shadow Clone, which could later be considered the technique that made Naruto the trademark. Iruka passed his graduation exam and gave him the iconic Konoha forehead band. He was then assigned to Team 7 along with Haruno Sakura and Uchiha Sasuke under the leadership of the superior ninja (Jounin) Hatake Kakashi. The four of them gradually developed special feelings like a family. Especially between Naruto and Sasuke, the two have implicitly considered each other as close friends and they constantly try to practice to improve. However, in his heart Sasuke always harbored the intention of one day killing his brother Itachi Uchiha, who murdered the entire Uchiha clan and abandoned Konoha to join the Akatsuki criminal organization. Orochimaru (one of the Sannin)