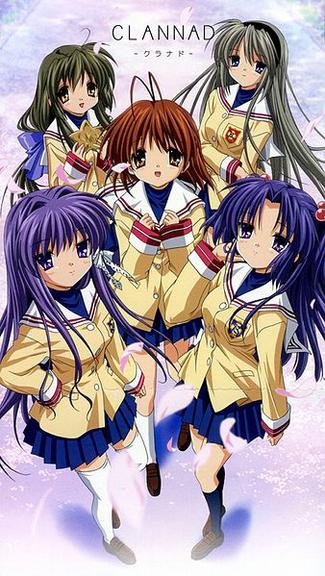 The Clannad television anime series is based on the visual novel of the same name written by Japanese software company Key. The episodes, produced by Kyoto Animation, are directed by Tatsuya Ishihara, written by Shimo Fumihiko, and illustrated by Kazumi Ikeda based on the original Hinoue Itaru. The plot revolves around the life of Tomoya Okazaki, a high school boy dissatisfied with his current life, and that all changed when he met Nagisa Furukawa, a schoolgirl one year older than him. The first Clannad series consisted of 24 episodes, 23 of which originally aired from October 2007 to March 2008. The last episode was released as an OVA in the 8th DVD set in July. 2008. The anime was released into eight DVD sets in Japan from December 2007 to July 2008 with compilation by Pony Canyon, each consisting of three episodes. The North American distribution of the anime series Clannad was licensed by Sentai Filmworks, which was subsequently localized by Section23 Films to distribute the TV episodes and OVAs in North America, starting with the first half of the 12-episode set of anime with English subtitles, Japanese audio, and no English dub, released in March 2009. The second half of the disc set consisting of the remaining anime episodes was released in May 2009. Sentai Filmworks and Section23 Films released all episodes of the anime, including the OVA, in a compilation with the full English dub on June 15, 2010. A sequel anime series titled Clannad ~After Story~ is produced by the same staff as the first film, also with the same old voice actors, and follows Nagisa's life in Japan. the first part is from the Clannad visual novel. The 24 episode productions for Clannad ~After Story~ aired in Japan from October 2008 to March 2009. The episodes were also released as eight DVD sets from December 2008 to July 2009 The eighth DVD volume also includes an additional OVA. Sentai Filmworks continued to license Clannad ~After Story~ in North America and localized Section23 Films to distribute the television anime episodes including the OVA with the first half of the set with English subtitles, which was released in October 2015. 2009. The second half of the set containing the final episodes was released in December 2009. Sentai Filmworks will re-release CLANNAD ~After Story~ with an English dub in April 2011. In addition to the theme songs used for each episode, all of the remaining music of the two anime series are taken from the music albums of the Clannad visual novel, including the Clannad Original Soundtrack, Mabinogi, -Memento-, Sorarado, and Sorarado Append. The cover art for the Sorarado Append album is used in the ending of the first anime ending theme. It contains four songs inserted in each episode of the first anime season and used in Clannad ~After Story~, including: "Kaze no Shōjo" (風の少女, "Kaze no Shōjo") and "Ana" first used in volume 9, "Ōbā" (オーバー, "Ōbā" Over) was first used in volume 18, and "-Kage Futatsu-" (-影二つ-, "-Kage Futatsu-") was first used in episode 22 and also serves as the visual novel's ending theme song.

Out of the 24 episodes released,