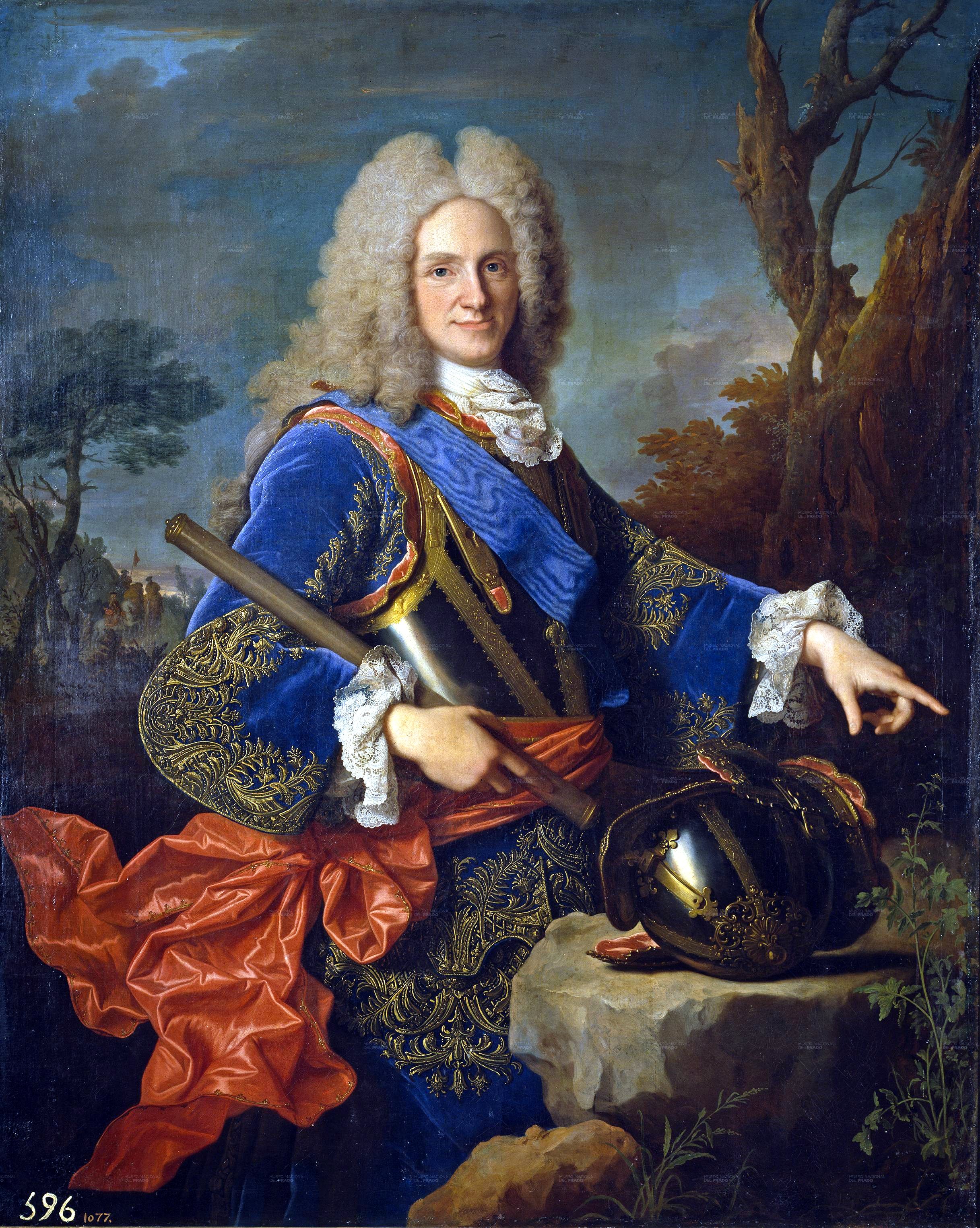 Felipe V (French: Philippe; December 19, 1683 – July 9, 1746) was King of Spain. Felipe was crowned twice. The first time was from November 1, 1700 to January 15, 1724 and then ceded the throne to his son Luis I. When Luis I died, Felipe returned to the throne, reigning, and from September 6, 1724 until his death on this date. July 9, 1746. Before ascending the throne, Philippe held a high position in the French royal family, he was the grandson of King Louis XIV. His father, Louis, Grand Crown Prince, was the rightful heir to the throne in Spain after the throne was vacated in 1700. However, because of the Crown Prince and his eldest son, as well as being Philip's brother, Louis, Duke of Burgundy, was not supported to take the throne of both France and Spain, so King Carlos II of Spain proposed Philippe as his successor in his will. However, aware that Philippe's possibility of succeeding to the French throne was very high, the European powers were afraid of the imbalance of power in Europe when France and Spain merged, so they sought to prevent stopped it with a 14-year war, the War of the Spanish Succession, which ended with the Treaty of Utrecht to prevent the unification of the two thrones. Felipe was the first member of the Bourbon family to rule Spain. His total reign, 45 years and 21 days, is a record in Spanish history for several hundred years.

Philippe was born at the Palace of Versailles in France. He was the second son of Louis, Grand Prince, heir to the French throne, with Crown Princess Maria Anna Victoria of Bavaria, Dauphine Victoire. His brother Louis, Duke of Burgundy, father of King Louis XV of France. When he was full of age, Philippe was made Duke of Anjou, the traditional title for the second son of the French royal family. He was often called by this name before becoming king of Spain. Because his brother, the Duke of Burgundy, was second in line to the French throne after his father, there was little hope for both him and his brother, Charles, Duke of Berry, to have successor in France. Philip and his brothers were brought up by tutor François Fénelon, Archbishop of Cambrai. The three also had another tutor, Paul de Beauvilliers.

Claiming the throne of Spain

In 1700, King Carlos II of Spain died childless. Philippe did not have many opportunities to be king of Spain then, as his paternal grandmother, the First Princess of Spain, daughter of King Felipe IV with his first wife, Isabel de Bourbon, had renounced the right to the throne. Marie Elisebeth was the half-sister of King Carlos II. In fact, his ancestor, King Louis XIV, and other European monarchs agreed that the throne would go to José Fernando. The first treaty to divide Spain, signed at The Hague in 1698 by which José Fernando would be king of all of Spain except Guipuzcoa - and Sardinia, the Spanish Netherlands and territories in North America . France was given Guipuzcoa, Naples and Sicily, while Austria would take Milanesado. José Fernando's death frustrates the plan. At that time the king's will was to pass the throne to Philippe, the grandson of his half-sister, Mari .