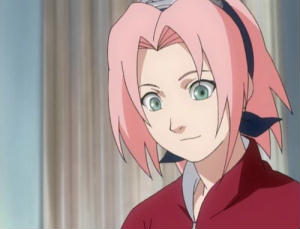 Haruno Sakura (Japanese: 春野 サクラ, Haruno Sakura) is a fictional character of the Naruto series created by Kishimoto Masashi. Sakura is the kunoichi (female ninja) of Konoha (木ノ葉隠れの里), and is a member of Team 7 along with her teammates Naruto Uzumaki, Sasuke Uchiha, and their instructor, Naruto. Hatake Kakashi. In the early stages of the series, Sakura was extremely enamored with Sasuke and looked down on his then-unskilled teammate, Naruto. However, in her later stages, she begins to let go of her prejudices, increasingly appreciating and acknowledging Naruto. In addition to the main series, she has also appeared in a number of other related works, notably the spin-off Naruto Gaiden: Nanadaime Hokage to Akairo no Hanatsuzuki (2015) and the sequel Boruto - Naruto Afterlife (2016). . In the sequel, she is introduced as a healing ninja named Haruno Sakura (Japanese: うちは サクラ, Haruno Sakura). Sakura is the main heroine of the series. Kishimoto had difficulty drawing Sakura, resulting in unintentionally emphasizing certain parts of her appearance, including her large forehead. In order to make the character more attractive in Part II of the Naruto manga, Kishimoto designed her outfit to be more like a martial artist and to become more beautiful in later chapters. Nakamura Chie is the Japanese voice actor for the character in the anime version of the series, while Kate Higgins is the English voice actress. Many anime and manga publications praise and criticize the character. She was initially noted as the stereotypical character in the shōnen manga, acting as the person Naruto had a crush on. However, she is said to be of little use in the early stages of the series other than as a comedy to reduce tension in the story. As the series progresses, she breaks out of the mold and receives much praise from critics. In many Naruto readers' polls, Sakura many times took high place among the most popular characters. Several Sakura related products have been released, including moving models and keychains.

Although Sakura is the female character that appears the most in Naruto, Kishimoto likes Sakura because he feels that she has many of the personality traits found in everyone, giving her the impression of a real person. When Kishimoto was asked in an interview if Sakura's background had not been revealed, he replied that he had never thought about it since Sakura was an "ordinary girl". Readers often ask Kishimoto why he didn't introduce Sakura's family until Naruto: Road to Ninja. The author responded that this wouldn't be interesting because Sakura doesn't belong to any clan like the other characters so her parents are commoners. When designing Sakura, Kishimoto focused on her figure and created it. The simpler the outfit, the better. That is different from the other main characters of the series, whose costumes are drawn in great detail. Leggings are a notable feature of Sakura's design because it is an outfit that shows her dynamism. At the beginning of the series, the tight pants