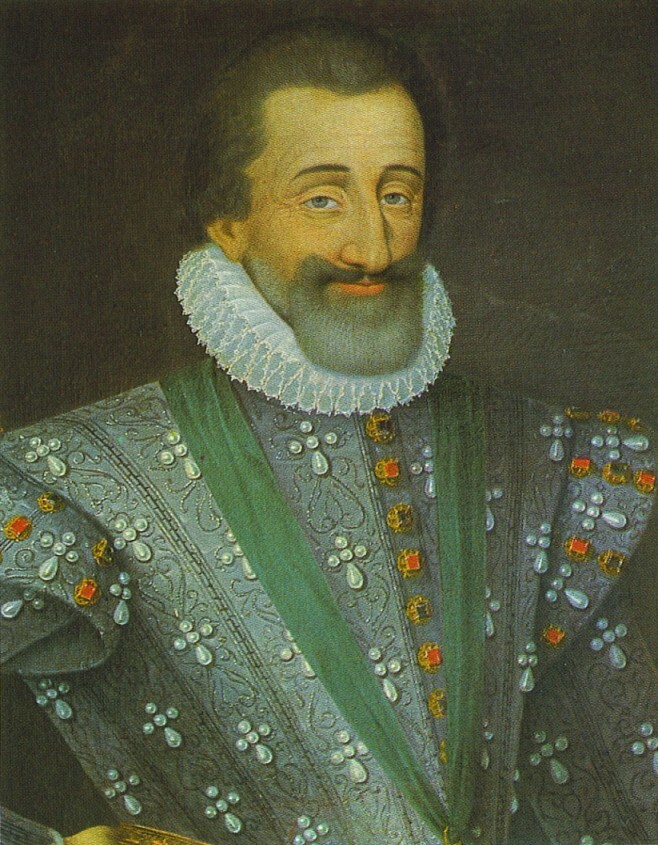 Henri of Bourbon (French: Henri de Bourbon; December 13, 1553 – May 14, 1610), also known as Henri IV of France (French: Henri IV de France) or Enrique III of Navarra (Spanish: Henri IV de France) : Enrique III de Navarra), was King of France from 1589 to 1610, served as King of the Kingdom of Navare (Henri III) from 1572 to 1610. Henri IV was the first Bourbon monarch of the Capetian Kingdom of the Kingdom. France. His mother was Jeanne III of Navarra, and his father was Antoine de Bourbon, Duke of Vendôme. A Protestant (Huguenot), Henri participated in the War of Religion before being crowned King of France in 1589. In 1598, Henri issued the edict of Nantes guaranteeing religious freedom to Protestants, thanks to That ended the civil war. To gain the throne and support from the French people, Henri accepted to convert from Protestantism (according to Calvinism) to Catholicism with the famous saying "'Paris vaut bien une messe'" (Paris is worthy of a feast). Misa). As one of the most popular monarchs, Henri was always concerned with the welfare of his subjects, and was steadfast in his stance of religious tolerance, which was unusual at the time. Henri died on May 14, 1610, the king was assassinated by François Ravaillac, a fanatic Catholic. Henri is also known as Henri the Great (Henri le Grand), in France, people also call him le bon roi Henri (King Henri Merciful), or le Vert galant (Glorious Mr. Green).

Henri IV was the son of Antoine de Bourbon, Duke of Vendome, and Jeanne III of Navarra, Queen of Navarre. Henri was born at the castle of Pau, in the Pyrenees-Atlantiques department, southeastern France (formerly the province of Béarn). When King Henri III of France died without an heir, the throne passed to Henri IV, according to Salic law, the principle of passing the throne to the oldest male descendant of the Capet family. However, the new king was forced to fight for a while before being recognized by Catholics (who were largely opposed to the Protestant faith) as the official monarch of France.

Although baptized (baptized) according to the Roman Catholic rite, Henri was raised in the Protestant faith by his mother; Jean d'Albret proclaimed Calvinism as the state religion of the Kingdom of Navarre. From a young age, Henri joined Huguenot forces in the French Wars of Religion. On June 9, 1572, when Jeanne died, he became King Henri III of Navarre. On August 18, 1572, Henri married Marguerite de Valois, Queen of France, sister of King Charles IX. Many believe that this marriage was the result of a reconciliation effort that could bring peace to the country. However, some Catholics (including Catherine de' Medici, the bride's mother) secretly planned a massacre of Protestants as they gathered in Paris for the wedding. During the Saint Barthélemy's Day massacre, on August 24, several thousand Protestants were killed in Paris, and several thousand more were murdered in the countryside. By pretending to agree to convert, Henri escaped death and imprisonment, but escaped in early 1576; February 5 of the same year, at Tours Henri rejected the Catholic faith and rejoined the Protestants. In 1584, when François, Duke of Alençon, e