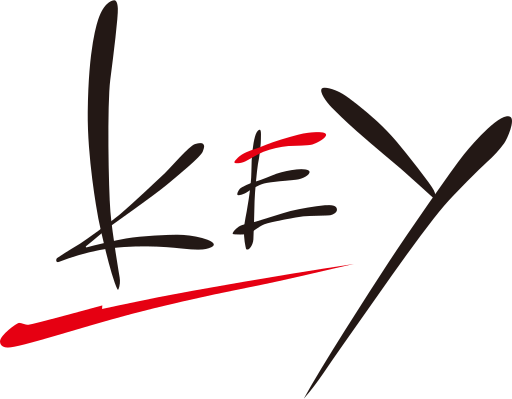 Key is a Japanese visual novel company founded on July 21, 1998 as one of the trademarks of Visual Arts publishing house, headquartered in Kita District, Ōsaka City, Ōsaka Prefecture. Key's first visual novel, Kanon (1999), built a detailed script combined with modern anime-style drawings and moving music, thereby creating a lot of emotions for the player. Key's second game, Air (2000), follows the same format, except that the plot is more complex and the gameplay is more radical than Kanon's. Initially, Kanon and Air both launched as adult games, but Key broke with this trend with their third title, Clannad (2004), for all ages. To date, Key has released 17 visual novels, the latest being Lunaria: Virtualized Moonchild (2021), and a mobile game in collaboration with Wright Flyer Studios, Heaven Burns Red. Key also collaborated with P.A. Works and Aniplex in producing the Angel Beats! anime series! (2010), Charlotte (2015) and Kami-sama ni Natta Hi (2020). An anime crossover with characters from many Key works titled Kaginado aired in 2021, and an anime for the Prima Doll multimedia project is also scheduled to air in 2022. Co-founder Maeda Jun is considered the flagship of this brand; He participated in planning, writing and composing music for Key's main visual novels. Na-Ga is Key's main artist; in the early years his main work was background graphics, but since the sixth game is Little Busters! (2007), Na-Ga became co-artist with Hinoue Itaru, Key's former artist. Since the company's 13th visual novel Summer Pockets (2018), Key welcomes artist Fumuyun as a key character designer alongside Na-Ga. Orito Shinji, Key's main songwriter and co-founder, produced music on most of the work. Kai was originally a writer from parent company Visual Arts, but has actively developed many of Key's games, and continued in the role after the resignation of one of the main screenwriters, Tonokawa Yūto. Some of the prominent outsourced screenwriters who helped write Key works include Tanaka Romeo, Ryukishi07 and Matsuyama Takeshi. Key has participated in the Comiket fair several times since Comiket 57 in December 1999, where they sold Kanon-themed items; Key's latest appearance at Comiket was on Comiket 91 in December 2016. In recent years, Key actively participates in anime fairs and exhibitions outside of Japan, where they interact with fan community and sell products to its overseas customers. In 2001, Visual Arts founded Key Sounds Label to release music albums and singles for music related to Key's games as well as the anime they collaborated on. As of 2020, Key Sounds Label has released nearly 200 discs. From 2007 to 2010, Key self-produced an Internet radio program called Key Net Radio to promote their brand. Many of Key's games have a strong sales track record of consistently topping the world charts