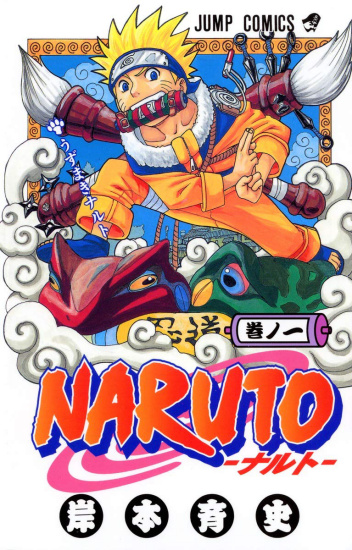 Naruto is a manga series created by Kishimoto Masashi. The work tells the story of Naruto Uzumaki, a young ninja who always wants to find a way to assert himself to be recognized by everyone and raise his dream of becoming the Hokage - the leader of Konoha. The plot is split into two parts – the first is set a few years before his teenage years (Naruto: Dattebayo) and the second is in Naruto's teenage years (Naruto: Shippuden). The series is based on two of Kishimoto's Yomikiri: Karakuri (1995), which helped Kishimoto win Shueisha's monthly Hop Step Award in subsequent years, and Naruto (1997). Naruto was serialized in Weekly Shōnen Jump, Shueisha's magazine from 1999 to 2014, and was packaged in tankōbon with 72 volumes. The manga inspired an anime series co-produced by Pierrot and Aniplex, which had a total of 220 episodes that aired in Japan from 2002 to 2007; The English-language adaptation of the series aired on Cartoon Network and YTV from 2005 to 2009, while the Vietnamese dubbed version of the series aired on HTV3 from 2014 to 2016 and POPS Worldwide released on digital platforms. with a new Vietnamese dub from December 2020. The sequel to the series, Naruto: Shippuden, premiered in Japan in 2007 and ended in 2017 with a total of 500 episodes. The English adaptation aired on Disney XD from 2009 to 2011 with the first 98 episodes, and then moved to Adult Swim's Toonami slot in January 2014, starting with episode one. The English adaptation continues to air weekly on Adult Swim. The Vietnamese dub version of the series aired on HTV3 in 2016 and 2017 with the first 196 episodes. In addition to the anime series, Pierrot is also developing eleven feature films and twelve OVAs. Other Naruto-related franchises include light novels, video games, and trading cards developed by different companies. Viz Media licensed the manga and anime in North America and serialized Naruto in their digital Weekly Shonen Jump magazine. The anime series began airing in the United States and Canada in 2005 and in the United Kingdom and Australia in 2006 and 2007. The movies and most OVAs from the series were released by Viz, with parts The first film was shown in theaters. Viz Media began streaming the two anime series on their Neon Alley streaming service in December 2012. Naruto's story continues until Naruto's son, Uzumaki Boruto, in Boruto: Naruto Next Generations: Boruto's Wish follow his own ninja path instead of relying on his father. Naruto is at number four on the best-selling manga list, selling 250 million copies worldwide, with 153 million copies sold in Japan alone and the remaining 97 million copies sold elsewhere. The work became one of Viz Media's best-selling manga series; English translations of the series have appeared on the USA Today and The New York Times bestseller lists, and the seventh volume won a Quill Award in 2006. It was positively reviewed by critics. manga's character development, strong plot, pretty well done fight scenes,