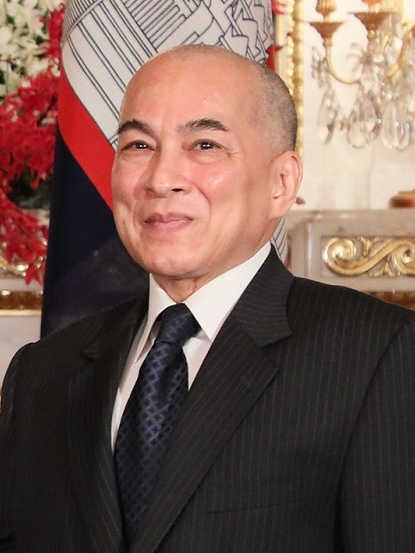 This is the Cambodian name, the family name is written first, the first name is written after: the family name is Norodom. However, modern Cambodian names in Latin characters are usually written in Western order (first name before last name). In addition, the name may also include titles in front. Norodom Sihamoni (Khmer: នរោត្តម សីហមុនី, born May 14, 1953 in Phnom Penh) is the current King of Cambodia. He is the son of former King Norodom Sihanouk and Queen Mother Norodom Moninaeth. Currently, he is still unmarried.

His childhood was spent mainly in Prague, Czechoslovakia. He studied music, drama, and dance at the Prague National Conservatory, graduated from the Prague Academy of Musical Arts in 1975. In 1976, he graduated with a master's degree in film arts from the Democratic Republic of Vietnam. Korean people. He later worked as a professor of classical dance at many French conservatories; President of Khmer Dance Association in France; worked as artistic director of the ballet group DEVA and the Royal Khmer Film Association (Khmera Picture), composed 2 ballet films "Dream" and "Four Elements". Politically, he served as Cambodia's representative to the United Nations and UNESCO. On February 1, 1994, he was crowned Crown Prince (Sdech Krom Khun). On October 14, 2004, he was chosen by the Council of the Royal Highnesses to be the King of Cambodia instead of his father, who often stayed in Beijing for medical treatment. The official coronation ceremony took place on October 29 of the same year. Some opposition figures in Cambodia have criticized the king's concessions, describing it as too lenient for prime minister Hun Sen's decades-long leadership in the kingdom. In addition to his native Khmer language , Norodom Sihamoni is the only ruling monarch in the world who speaks Czech fluently. The king is also fluent in French, English and Russian.