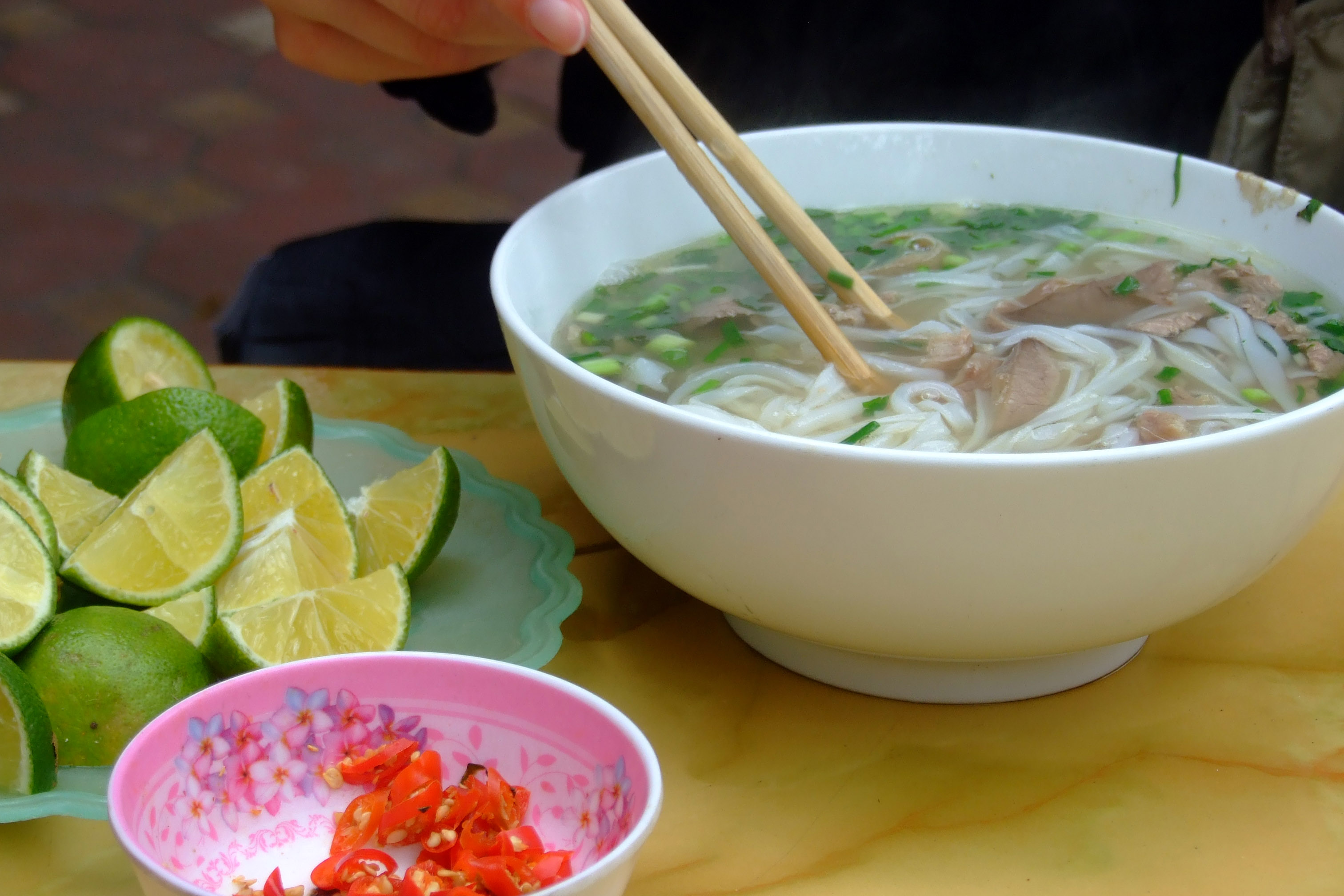 Pho is a traditional Vietnamese dish, originating from Hanoi and Nam Dinh, and is considered one of the typical dishes for Vietnamese cuisine. The main ingredients of pho are pho noodles and broth (or broth as the South calls them) along with thinly sliced ​​beef or chicken. The most suitable beef to cook pho is meat and bones from beef breeds (domestic beef, yellow beef). In addition, condiments such as: soy sauce, pepper, lemon, fish sauce, chili... These spices are added depending on the taste of the user. Pho is usually used to make breakfast in the morning or dinner at night; But in big cities, this dish can be enjoyed all day. In the southern provinces of Vietnam and some other regions, pho is presented with a plate of herbs such as onions, bean sprouts and the leaves of coriander and basil, in which coriander is the typical leaf of pho; However, in Hanoi normally there will not be this plate of raw vegetables. Pho is usually beef noodle soup or chicken noodle soup, but sometimes there are other variations such as pho with wine sauce, dry noodle soup, fried pho, sour pho, duck noodle soup in Cao Bang, roasted meat pho in the northern mountainous provinces, etc. .. The broth for pho is usually a clear broth made from beef bones (or pork bones), accompanied by a variety of spices including cinnamon, anise, roasted ginger, cardamom, sage, cloves, coriander seeds, and dried onions. Grilled... Meat used for pho is beef (with all kinds of corn, encrusted, bucket is made rare or fully cooked) or chicken (old chicken is boiled, torn meat for rich sweet meat). "Banh Pho" is traditionally made from rice flour, coated in thin sheets and then cut into fibers. Pho is always enjoyed while still hot. Accordingly, to have a delicious and flavorful bowl of pho, this also depends a lot on the skill of the cook, the most important of which is the broth.

One of the first documents mentioning pho is the Sino-Vietnamese dictionary Nhat Dung Thuong Dam (日用常談) compiled by Pham Dinh Ho in 1827. In the food category, the Chinese word phrase 玉酥餅" Ngoc to Binh" is annotated in Nom as 𩛄普𤙭 "beef noodle soup". Pho as it is today is said to have been born and shaped in the early 20th century. Hanoi and Nam Dinh are two localities. often said to be the origin of pho. In Nam Dinh, pho originates from Van Cu village (Dong Son commune, Nam Truc), famous for the Co family who brought the family tradition of pho cooking everywhere to make a living. Pho is believed to have started to be popular in the context of the formation of Nam Dinh Textile Factory. Pho has also appeared in Hanoi since the early 20th century, this is also known as the place that made this dish famous. It is said that pho originates from a Cantonese dish called "Nu hummong" (Chinese: 牛肉粉; pinyin: niúròu fěn; Yueping: ngau4 juk6 fan2). There are other theories that say pho. originated from the French method of preparing beef stew pot-au-feu (pronounced "pô pho") combined with spices and herbs in Vietnamese cuisine. There is also an opinion that pho originates from the "buffalo stir-fry" (using vermicelli noodles) of Vietnam.