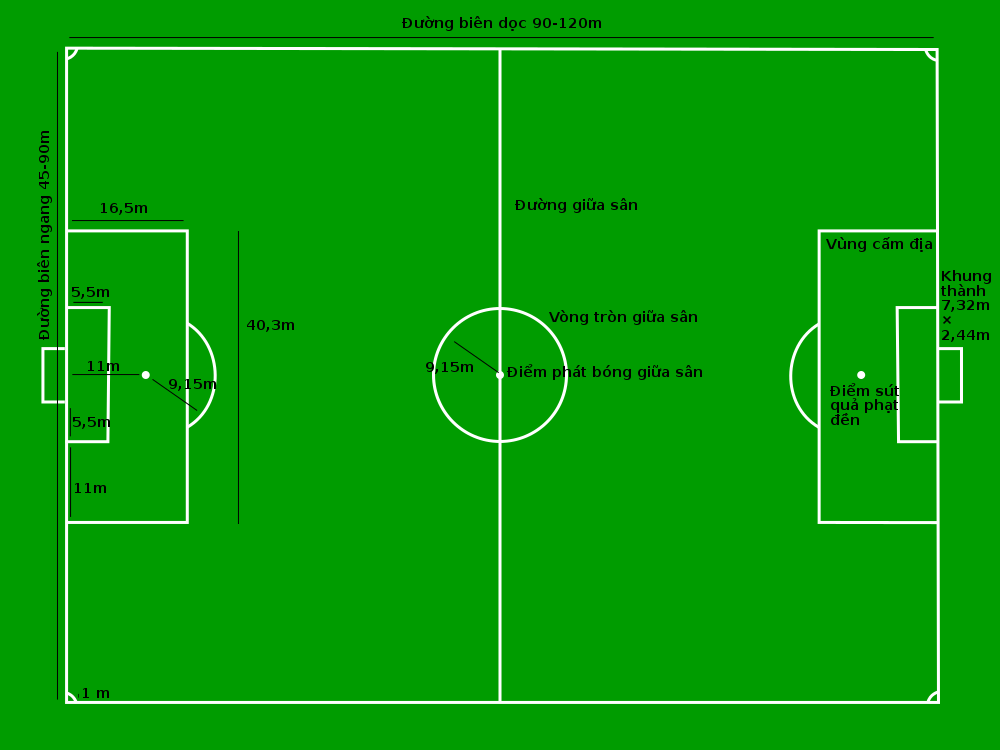 A football field is a type of football field. The playing field is rectangular with a length greater than the width, the surface of the field can be natural grass or artificial turf. The size and position of the soccer field's boundary lines are regulated by Law I: Field of Competition in the Laws of Football. Beginning in 2008, to standardize the size of football fields for international matches. , IFAB decided to set the fixed size as: length 105m and width 68m (instead of min and max length from 100m to 110m and min and max width from 64m to 75m as before).

Structure of a football field

The two lines that are longer along the length of the pitch are called the goal line. The two shorter limit lines across the pitch are called the goal line. Limit lines are not wider than 12 cm. The line that runs horizontally and divides the court into two equal parts is called the midfield line. In the center of the midfield line there is a clear point that is the center of the field. Take that point as the center and draw a circle with a radius of 9m15, which is the circle in the middle of the yard.

From the point 5m50 from the vertical post on the horizontal line of each part of the field, draw inwards 2 parallel lines, perpendicular to the crossbar and with a length of 5m50, draw a line connecting the two ends of that line. The area limited by straight lines and horizontal lines is called the goal area. The world goal has a width of 7.32m and a height of 2.44. However, applied in Vietnamese football, the width is narrower than 7.12m and 2.4m high.

At each corner of the yard, there is a flagpole at an angle that is not pointed at the top and is at least 1m50 high. Outside the midfield line, at least 1m from the two vertical lines, two flagpoles can be placed.

Taking the center as the point where the corner flagpoles are placed, draw into the yard a quarter of an arc with a radius of 1m. This is the position of the ball to kick the corner kick.

In the center of each goal line is placed a goal (goal). The goal is composed of 2 vertical columns perpendicular to the horizontal line and equidistant from the 2 corner flagpoles, with a distance of 7m32, ​​(from the inside edge of the column) connected by a parallel crossbar and away from the ground. 2m44 yard (calculated from the bottom edge of the crossbar). Vertical posts and crossbeams must be of the same size and not exceed 12cm wide. The net usually must be hooked to the post, crossbar and attached to the ground behind the goal